My youngest little one is five years old and will be going to Kindergarten this fall. (I've already cried) It's hard on a momma to watch her kids grow. With both of my children being in elementary school, I'm entering a new season of life. With this new season comes a lot of different choices. I can feel God calling me to something. My role as mother is evolving into something new and different. I'll have more free time during the day so naturally I want to fill that time with something productive and God-honoring. I'm wondering what that should be. Should I go back to work? Go to Graduate School? Volunteer? Or should I invest 100% of me in motherhood?

I admit that I'm struggling with fear. Fear of failing at a new adventure. Fear of choosing the wrong path. I'm not completely sure why, although I suspect it has something to do with the trials I have faced in life. Circumstances have taught me that sudden disaster could be waiting for me at any moment. That may sounds like ridiculous paranoia but unless you have walked that path, you can't really appreciate the fear that comes with it. The sudden death of a loved one, an abrupt health crisis, the surprise betrayal of a friend, a court trial, a car accident...it all adds up. It sends the message that life can be unpredictable and scary. The implications of that for me is that starting something new feels very risky. Part of me would rather stay in my nice comfortable boat. Yet there's still that part of me that's dying for adventure and new learning experiences.

One of my favorite true stories of all time is in Matthew 14 when Jesus walks on water. It's rich with life lessons and it reveals the character of Jesus. It begins with Jesus walking out on the lake towards the disciples. They think He is a ghost and they cry out in fear (I probably would've been the first one to freak out).  But Jesus immediately tries to calm them by saying, “Take courage! It is I. Don’t be afraid.” Then Peter says, “Lord, if it’s you, tell me to come to you on the water.”  And Jesus said, “Come."

Jesus told them to take courage and apparently Peter takes that advice to another level. He gets out of the boat and walks ON WATER toward Jesus. This had to have been a remarkable experience for Peter. I can't imagine what was going through his mind. But the amazing moment didn't last long. When he saw the wind, he was afraid. As he sank into the water he cried out, “Lord, save me!” Immediately Jesus reached out his hand and caught him. “You of little faith,” he said, “why did you doubt?”

Peter is sinking and the Lord is rescuing. It's obvious why Peter sank. He took his eyes off Jesus and as a result he became afraid and then the doubt creeped in. I think it's interesting that Jesus asked Peter "why did you doubt?" instead of "why were you afraid?". Fear wasn't necessarily the problem as much as the doubt that resulted from that fear. The overall lesson here: we must keep our eyes on Jesus and everything else will fall into place. It's the struggle of all Believers.

Why did the Lord rescue? Because Peter called to him, "Lord, save me!" And that's all it took for Jesus to reach out his hand and save Peter from drowning. Jesus didn't wait. He didn't let Peter struggle in the dark water for a while to teach him a lesson. Jesus didn't require Peter to say a fancy prayer. Rather, Jesus had immediate compassion and concern for Peter's life. The Lord was faithful and trustworthy in Peter's time of need and failure.

So many times in my past when things got scary, I can remember calling on the name of Jesus. He immediately reached out His hand and caught me. The fear went away. But even so, I still forget. I still succumb to the fear. Fear can be a powerful thing. I personally like to be unafraid and safe in my nice cozy boat. However, God has not called me to comfort and safety. He has called me to courage and boldness. I love that Peter got out of the boat and walked on the water...when it was windy...in the dark. It makes me want to shake his hand someday. And honestly, I love it that he failed (sorry Peter) because it reminds me that it's part of the Christian life.

The end to this story is too amazing not to mention. Instead of feeling ashamed of their fear the men on the boat were compelled to worship Jesus, "Then those who were in the boat worshiped him, saying, “Truly you are the Son of God.” Fear and failure did not win that night. It was overcome and the result was worship and glory to God. I wonder if Peter had never gotten out of the boat and if Peter had not failed if the men would have been drawn to worship? I don't know. But I think it's very cool that the story ends the way it did.

I always learn a lot from this story. My lesson this time around is to have the courage to get out of the boat, keep my eyes on Jesus, to push back the fear that causes doubt, and if (when) I fail...worship Him rather than drowning in self pity or shame. I don't know how my story ends yet, but I sure hope it ends with God receiving worship and glory!
Posted by Jennifer Legate at 9:59 AM 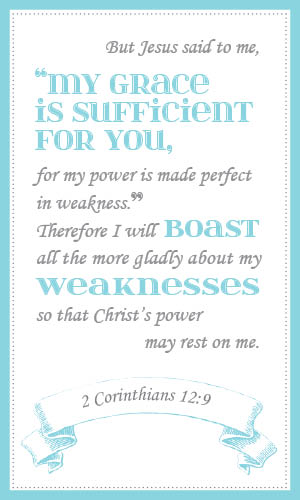